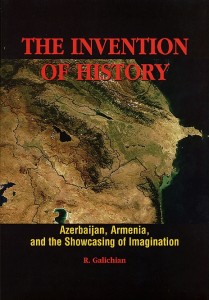 Rouben Galichian’s “The Invention of History: Azerbaijan, Armenia and the Showcasing of Imagination” (Gomidas Institute/Printinfo Art Books) is a very important book that addresses a core issue facing the Armenian people 95 years after the Armenian Genocide: survival in the face of further erasures and eradications.

This is an issue with many dimensions, some of them well known and others not. Galichian, whose prior works include “Historic Maps of Armenia: The Cartographic Heritage” (I.B. Tauris) and “Countries of the Caucasus in Medieval Maps: Armenia, Georgia and Azerbaijan” (Gomidas Institute Books), focuses here on one of the lesser known aspects, Azerbaijan and its attacks on Armenian history, identity and survival.

Azerbaijan was founded in 1918 under the leadership of the pan-Turkic Musavat Party. There had been no previous Azerbaijani state in history, and the name was taken from the territory south of the Arax River, in northern Persia (present-day Iran), where much larger numbers of Azeri speakers lived and continue to live today. Galichian notes that Persian officials considered the use of the name usurpation and protested its use at the time.

In the territorial jockeying that went on in the early Soviet Union, Azerbaijan was given control of Nagorno-Karabagh (Artsakh) with its 95 percent Armenian majority, and Nakhichevan, that was 40 percent Armenian, in 1920. These were bitter defeats for Armenia, but ironically, they also further exacerbated Azerbaijan’s own identity problem. The people called Azeri today are an amalgam of Arab, Turkic, and Persian peoples who had historically been known as Caucasian Tatars. The territory that became Azerbaijan not only contained hundreds of thousands of Armenians but also large numbers of non-Azeri Muslims and some non-Armenian Christians. Azeri leaders were faced with the problem of how to forge a national identity where none had existed before.

The answer was to fabricate a history. The officially sponsored Buniatov or Baku School of Historiography (Ziya Buniatov was an Azeri revisionist historian) developed to re-write history in the service of national ambition. In his early chapters, Galichian examines two books that exemplify the fruits of these labors, War against Azerbaijan: Targeting Cultural Heritage and Monuments of Western Azerbaijan. Just as Turkey claims its roots in the Hittites and other people with whom it has no historical connection, Azerbaijan claims to be the heir to the Caucasian Albanians, a Christian people who ruled much of what is now Azerbaijan and had became extinct in the 12th century. This subterfuge eradicates a millennia-long Armenian presence and allows Azeris to be presented as indigenous and the Armenians as latter day interlopers. This is the history that has been taught to Azeri schoolchildren for decades, and its irredentist implications are clearly revealed when we understand that “Western Azerbaijan” refers to Armenia itself.

Galichian painstakingly examines the fate of Armenian monuments in territories that came under Azeri control. No Armenians live in Nakhichevan today. Nor do we find the more than 200 Armenian churches, monasteries, chapels and cemeteries that were found there in the early 19th century. In one startling section of his book Galichian documents the fate of a cemetery that once contained 10,000 khachkars (carved Armenian burial stones). This cemetery in Nakhichevan was on the northern bank of the Arax River and clearly visible from Iran. The last 2,000 of these khachkars were toppled and broken up a decade ago by the Azeri army. The remnants were taken away on trains or dumped into the river. Galichian provides photographs of this destruction taken by Scottish architect Steven Sim. Today the site is a military shooting range.

This is an important book for three reasons. First, Galichian’s text and photographs document the continuation of genocide in the form of the final eradication of the Armenian people’s history. The story Galichian tells is not a new one and has close parallels in Azerbaijan’s sister republic Turkey where Armenian monuments have been razed, used as targets in artillery practices, taken apart for building materials, and used as stables. And where the monuments have tourist value, they have been attributed to others. This is a game played by both Turkey and Azerbaijan.

Second, Galichian’s book is timely given the terms of the stalled (but revivable) Turkish-Armenian Protocols that would radically re-define Turkish-Armenian-Azeri relations without strong protections for Armenia’s national security interests. The fate of Armenians in Nakhichevan including the final eradication and erasure of their historical presence was captured in the term “Nakhichevan-ization” that became a symbol of cultural genocide and inspired an Armenian vow that the process would not be repeated in Artsakh. Galichian’s book stands as a warning. He makes it very clear what is at stake if Armenia succumbs to Western pressure, and to Turkish and Azeri promises of brotherhood, good-will, and solidarity.

Thanks to the liberation of Artsakh (Nagorno-Karabagh) between 1988 and 1994, the fate of Armenian monuments is now under Armenian control. The last of Galichian’s contributions is that his photographs document both the ravages of Azeri vandalism and neglect of Armenian monuments such as Dadivank and the Gandzasar Monastic complexes and their subsequent restoration by Armenian artisans after 1994.

Overall, Galichian has made a truly significant contribution to our understanding of continuing attacks on the history and legacy of the Armenian people. He has compiled the history and allowed it to speak through text and photographs of the dangers of any Western brokered “peace settlement” that calls for the surrender of Armenian held territory without the full independence of an internationally guaranteed and recognized Artsakh.

Rouben Galichian. “The Invention of History: Azerbaijan, Armenia, and the Showcasing of Imagination.” Gomidas Institute-London and Printinfo Art Books-Yerevan. 2009. In English. 112 pp. Includes a DVD on Armenian Julfa and more than 50 color photos and maps. $30 US, available from AbrilBooks.com, NAASR.org and Gomidas.org.