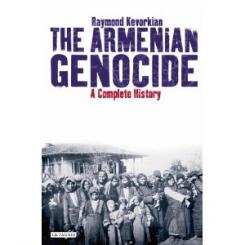 Raymond Kevorkian is a renowned French-Armenian historian academic and curator of the AGBU Paris Nubarian library. Kevorkian is also a lecturer at the Institute Française de Géopolitique, University of Paris. His book “The Armenian Genocide: A Complete History” provides an authoritative account of the origins, events and consequences of the Armenian Genocide. Kevorkian considers the role it played in the construction of the Turkish nation state and Turkish identity, as well as exploring the ideologies of power and state violence. Crucially, he examines the consequences of the violence against the Armenians, the implications of the deportations and the attempts to bring those who committed the atrocities to justice. Kevorkian’s experience spans over 20 years after covering the history of the Armenians during 16th & 17th century, Kevorkian realized that it was time to focus on the Armenian Genocide. What makes this publication interesting is the author’s effort in maintaining a balance in his research by considering the circumstances of the victim as well as the perpetrator. In a sense looking at both sides of the coin. In his work, Kevorkian traces each route of the process of deportation and genocide, by depicting the events as if he was present during these events and as the heinous plan of Genocide was put into practice. The evidence provided by (Genocide) survivors has a significant sole and importance in this book. The author has refrained from defining most horrific events, finding them impossible to bear particularly by the reader.