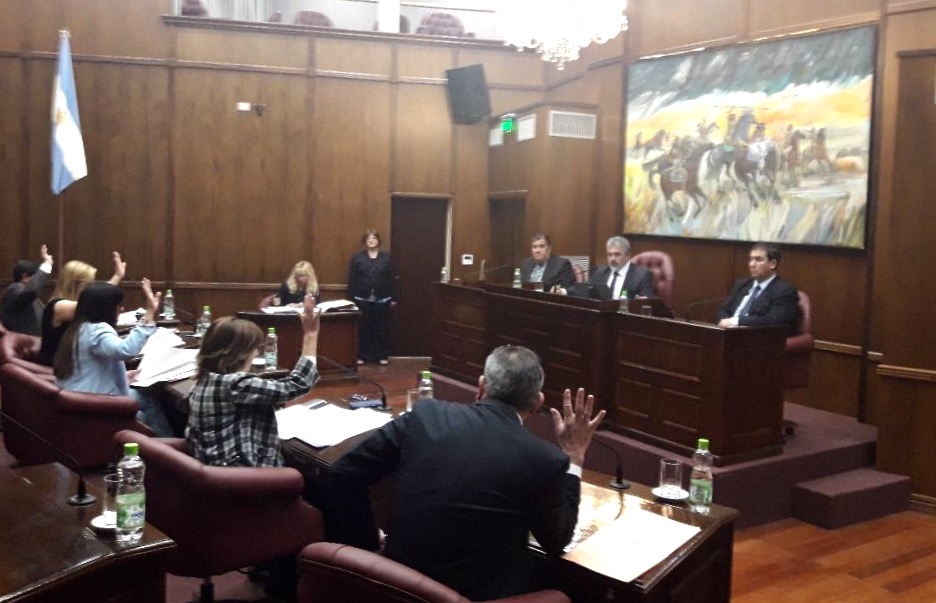 (prensaarmenia.com) The province of San Luis, Argentina, approved on November 21 a law of adhesion of the National Law 26,199 that declares April 24 of every year as the “Day of Action for Tolerance and Respect between Peoples” in commemoration of the Armenian Genocide, becoming the twentieth province to do so.

The Chamber of Senators of San Luis voted unanimously for the formal recognition of the Armenian Genocide and adhered to “the acts and events for memory and claim of the Armenian community” and undertook to “promote actions of commemoration at the provincial level”, according to the approved project.

“This adhesion of the Senate legislators takes place in the context of the 10 years of the promulgation of the National Law and the declaration of the Parlasur,” said Nicolas Sabuncuyan, director of the Armenian National Committee of Argentina. “It ratifies the consensus that exists at a regional, national and federal level regarding one of the main issues of the Armenian Cause, and will be the platform for a closer work with the representatives of the people of San Luis, especially in the field of education and the memory transmission.” 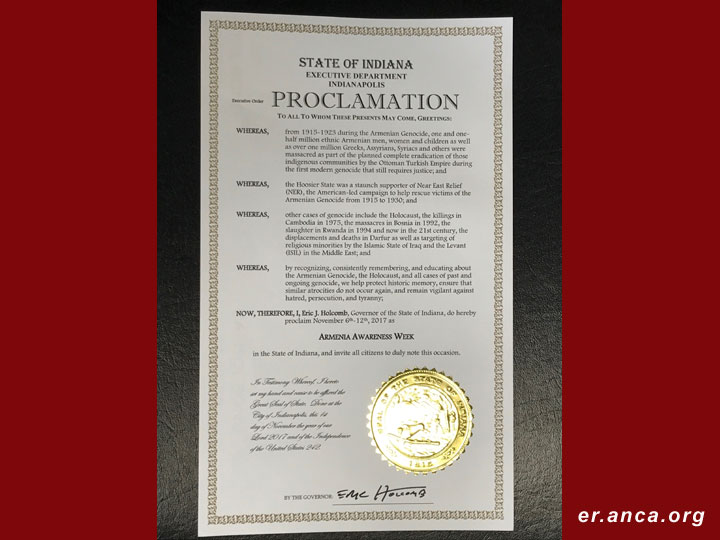 Governor Holcomb also declared November 6-12, 2017 as “Armenia Awareness Week” and invited the citizens of Indiana to “duly note this occasion.”

“We welcome this proclamation by Governor Holcomb, making Indiana the 48th state in the union to officially re-affirm this international crime against humanity,” said ANCA-ER Community Outreach and Communications Director Artur Martirosyan. “This proclamation serves as a reminder not only for the citizens of Indiana, but also for the denialist government of Turkey, which — for over a century — has been trying to hold truth hostage. Such policy is doomed to failure as we stand even stronger today with the people of good conscience in Turkey as well as our coalition partners, who have made this and other similar resolutions and proclamations a reality.”

“The Armenian community in Indiana is small, but mighty,” said ANC of Indiana Chairperson Seda Arzumanyan. “Armenians have called Indiana home for several generations and have made noteworthy contributions to the development of our great state. We are glad to see the Hoosier State join the rest of the nation in properly memorializing and condemning this horrific atrocity and look forward to celebrating our culture and heritage with our fellow Indianans during the week of November 6-12 and beyond.”

Iraqi Christian Relief Council Board Member Denise Bubeck said, “I am so very thankful Indiana has joined in remembering the Armenian Genocide, the Holocaust, past and present genocide; preserving the historic memory and ensuring that these atrocities will never occur again.”

Noting that the Ottoman Turkish government’s crime “still requires justice,” Gov. Holcomb’s proclamation cites Hoosier State’s active participation in the Near East Relief, an example of outpouring of generosity by the American people from the onset of the Armenian Genocide (1915-1923) and for 15 subsequent years in rescuing and providing assistance to hundreds of thousands of men, women and children who were victims of the genocide. The document recounts the cycle of subsequent genocides of the 20th and 21st centuries, specifically mentioning the Islamic State’s genocide against Middle East Christians, Yezidis, and other minorities. It concludes with the assertion that by “recognizing, consistently remembering, and educating about the Armenian Genocide, the Holocaust and all cases of past and ongoing genocide, we help protect historic memory, ensure that similar atrocities do not occur again and remain vigilant against hatred, persecution and tyranny.”

The full text of the Indiana proclamation is provided below.

Alabama and Mississippi are the last two U.S. states that have not yet officially memorialized and condemned the Armenian Genocide.

To All To Whom There Presents May Come, Greetings:

WHEREAS, from 1915-1923 during the Armenian Genocide, one and one-half million ethnic Armenian men, women and children as well as over one million Greeks, Assyrians, Syriacs and others were massacred as part of the planned complete eradication of those indigenous communities by the Ottoman Turkish Empire during the first modern genocide that still requires justice; and

WHEREAS, the Hoosier State was a staunch supporter of Near East Relief (NER), the American-led campaign to help rescue victims of the Armenian Genocide from 1915 to 1930 ; and

WHEREAS, other cases of genocide include the Holocaust, killings in Cambodia in 1975, the massacres in Bosnia in 1992, the slaughter in Rwanda in 1994 and now in the 21st century, the displacements and deaths in Darfur as well as targeting of religious minorities by the Islamic State of Iraq and the Levant (ISIL) in the Middle East; and

WHEREAS, by recognizing and consistently remembering, and educating about the Armenian Genocide, the Holocaust, and all cases of past and ongoing genocide, we help protect historic memory, ensure that similar atrocities do not occur again and remain vigilant against hatred, persecution, and tyranny:

NOW, THEREFORE, I, Eric J. Holcomb, Governor of the State of Indiana, do hereby proclaim November 6th-12th, 2017 as

in the State of Indiana, and invite all citizens to duly note this occasion.

In Testimony Whereof, Thereto
set my hand and cause to be affixed the
Great Seal of State. Done at the
City of Indianapolis, this 1st
day of November the year of our
Lord 2017 and of the Independence
of the United States 242.

BY THE GOVERNOR: [SIGNED]