In the aftermath of its disastrous defeat in WWI, Ottoman Turkey had to face the wartime crime of the destruction of its Armenian population. An inquiry commissioned by the Ottoman government in 1919 presented enough preliminary evidence to organize a series of trials involving the perpetrators of these crimes. It is the record of these trials and the unparalleled details they provide on the planning and implementation of these heinous crimes that has brought together the two most renowned scholars of the Armenian Genocide, Professors Vahakn Dadrian and Taner Akcam, in their first joint publication. It is with great pride that the Zoryan Institute announces that after years of research and analysis, the authors have compiled for the first time in English the complete documentation of the trial proceedings and have set these findings in their historical and legal context.

The book is entitled Judgment at Istanbul: The Armenian Genocide Trials and is published by Berghahn Books of New York and Oxford.

In describing the book, Prof. Dadrian commented, “This is a most important work, for two reasons. First, it is based on authentic Turkish documentation, which the Ottoman government was forced to release during the trials. Second, unlike most books on the Armenian Genocide, which are historical interpretations, this study, for the first time is based also on the testimony of high-ranking Ottoman officials, given under oath, on the magnitude of the crimes against the Armenians, and in this sense, serves as a legal case study of the Armenian Genocide.”

During his more than fifty years of research on the subject, Dadrian discovered that the Takvim-i Vekâyi, the official Ottoman government’s gazette, was not the only major source of information on these military tribunals. In fact, Renaissance, a French language Armenian newspaper in Constantinople at the time, reported summaries of many of the trial proceedings taken from the reports of the Ottoman language newspapers of the day, which were otherwise not accounted for in official government records.

Prof. Akçam, the book’s co-author, noted that “While the official government record lists only twelve trials, newspapers provide us details on sixty-three. For the first time, information from the Ottoman newspapers of the era has been utilized to reconstruct the trials. A great deal of effort was required to track down all issues possible of fourteen different Ottoman newspapers, which meant visiting many libraries in different cities. Often, the articles we were looking for had been cut out of the paper in one location, but we were able to find a copy in another location.” The Zoryan Institute sponsored the collection of these newspapers, their translation and transliteration, as part of the long-term project known as “Creating a Common Body of Knowledge,” and retains copies in its archives.

According to the Institute’s President, K.M Greg Sarkissian, “The objective is to provide knowledge that will be shared by Turkish and Armenian civil societies and western scholarship. The aim is to locate, collect, analyze, transliterate, translate, edit and publish authoritative, universally recognized original archival documents on the history of the events surrounding 1915, in both Turkish and English. Elaborating on the importance not only of the primary source material in this book, but also the analysis provided by the book’s authors,” he continued, “the more such documents are made available to Turkish society, the more it will be empowered with knowledge to question narratives imposed by the state. Restoring accurate historical memory will benefit not only Turkish, but also Armenian society. Both will be emancipated from the straightjacket of the past. Such a Common Body of Knowledge will hopefully lead to an understanding of each other, act as a catalyst for dialogue, and aid in the normalization of relations between the two societies. Judgment at Istanbul is the most recent example of the Zoryan Institute’s strong belief in the importance of a Common Body of Knowledge as a key factor in helping the future of any relationship between Turkey and Armenia.”

The trials described in Judgment at Istanbul had a far-reaching bearing in the international community. As the first national tribunal to prosecute cases of mass atrocity, the principles of “crimes against humanity” which were introduced then had their echo subsequently in the Nuremberg Charter, the Tokyo Charter, and the UN Genocide Convention. This book is an essential source for historians, legal scholars, political scientists, sociologists, policy makers, and those interested in Genocide Studies, Turkish Studies, and Armenian Studies. It also holds great current relevance, with recent interest internationally regarding the Armenian Genocide and its denial.

To order a copy for yourself, as a gift, or to help sponsor a book to be placed in university libraries, please contact the Zoryan office, 416-250-9807, zoryan@zoryaninstitute.org. 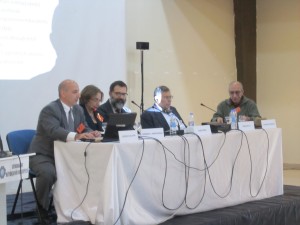 The Hrant Dink Foundation and Diyarbakir’s metropolitan municipality organized a workshop from November 11-13. The workshop focused on the social and economic history of the city and its surrounding areas from 1838 to 1938, tackling head-on the fate of the region’s vibrant Christian minorities. Opening remarks were made by Mayor Osman Baydemir who reminded the participants about Diyarbakir’s vibrant past during the Ottoman Empire era and how it decayed in the decades that followed because of the destruction of its Armenian and Assyrian population. He also informed the audience that the municipality is currently engaged in an effort to return properties confiscated from minorities to their rightful owners, or provide equivalent land elsewhere if the particular land is currently owned by a third party. Moreover, he added that renovating houses of worship also constitutes an effort to renovate the conscience of people and confront the past. “This city,” he went on, “belongs to Armenians and Assyrians as much as it belongs to Kurds. 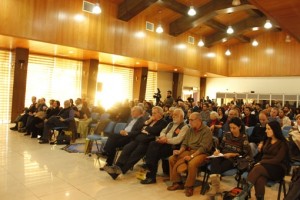 ”The keynote speech titled “The State, the Muslims, and the Non-Muslims, 1839-1938” was delivered by Ankara University professor Baskin Oran. The opening session also featured comments by Rakel Dink, Ali Bayramoglu, Cengiz Aktar, and others.Speakers at the workshop included genocide scholars and Ottoman historians from Europe, North America, and Turkey. David Gaunt, Raymond Kevorkian, Vahe Tashjian, Hans Lukas Kieser, Barbara Merguerian, George Aghjayan, Seda Altug, Janet Klein, Jelle Verheij, and Ayhan Aktar were among the participants. The conference was broadcast live on the website of the Hrant Dink Foundation, at www.hrantdink.org but in an yet another effort to suppress freedom of speech live-feeds from the foundation’s website were blocked in Turkey. The video of the conference will be made available online at www.hrantdink.org. Details, to follow.