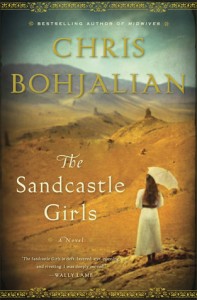 The announcement was first posted on Oprah.com, where the editors of O and Oprah.com informed their fans about “the newest releases that they couldn’t stop reading.” This week, “The Sandcastle Girls” was at the top of their list.

Oprah.com’s Nathalie Gorman explained “best known for his thrillers like Midwives, Chris Bohjalian has come out with a different kind of page turner—a searing, tautly woven tale of war and the legacy it leaves behind.”  She goes on to note, “This rendering of one of history’s greatest (and least known) tragedies is an nuanced, sophisticated portrayal of what it means not only to endure, but to insist on hope.”

The complete Oprah.com review is posted below.

“The overwhelming and well-deserved praise for Bohjalian’s masterful literary piece about the Armenian Genocide in prominent mainstream American media outlets, such as Oprah’s Blog, highlights the powerful role that his novel is playing in educating readers about this crime, and Turkey’s ongoing denial of both truth and justice,” said ANCA Executive Director Aram Hamparian. “’The Sandcastle Girls’ represents – in addition to a great literary work – a great contribution to the American and global public awareness that will be required to end, forever, the cycle of genocide and denial.”

More Praise for “The Sandcastle Girls” in Newspapers Across the U.S.

In addition to captivating the interest of Oprah Winfrey’s editors, “The Sandcastle Girls” and the Armenian Genocide issue has caught the attention of many notable American newspapers and online publications, including -“The Miami Herald”, “The Florida Times Union”, “The Minneapolis Star Tribune”, Ohio’s “The Columbus Dispatch”, “The Milwaukee Journal Sentinel”, South Carolina’s “The Hilton Head Island Packet”, Boston.com and MyCentralJersey.com.

Amy Driscoll, in her review for The Miami Herald, wrote about the real potential impact the novel has on educating American civil society about the Armenian Genocide. “Bohjalian’s book is about the ways the past informs the present, about the pain but also the richness of heritage. If his goal is to educate us, make us see what has been almost left behind in the dust of history, he succeeds. And after reading this book, we aren’t likely to forget,” noted Driscoll.

The complete Miami Herald review is available online (http://www.miamiherald.com/2012/07/20/2902778/chris-bohjalian-mines-his-armenian.html#storylink=cpy) and was published in the Friday, July 20 issue of the print edition.

Brandy Hilboldt Allport of The Florida Times Union wrote, “Bohjalian deftly widens a telescopic lens to encompass the ‘Meds Yeghern,’ or ‘Great Calamity’ of the Armenian genocide and then narrows it so that readers focus on the characters and join them in their passage through the story. The well-researched history that forms the background informs, intrigues and enchants — even as recollections of horror mount.”

The complete Florida Times Union review is available online (http://jacksonville.com/entertainment/literature/2012-07-22/story/book-review-sandcastle-girls-story-love-world-history-and#ixzz21SumaOhA) and was published in the Sunday, July 22 issue of the print edition.

Margaret Quamme of The Columbus Dispatch claimed, “For a historical novel, ‘The Sandcastle Girls’ is remarkably supple, employing only the most telling  of details.” Quamme further wrote about the novel’s potential of galvanizing a growing movement to help raise awareness about the cycle of genocide. “Laura and Bohjalian keep their eyes on the personal, the little moments that illuminate broader social movements. But moment-by-moment, and passage by passage, the novel lights up a disturbing period of history.”

The complete Columbus Dispatch review is available online (http://www.dispatch.com/content/stories/life_and_entertainment/2012/07/22/familys-story-illuminates-genocide.html) and was published in the Sunday, July 22 issue of the print edition.

Hours before his novel hit book stores, Bohjalian launched his book tour in Los Angeles and continued traveling to events in San Francisco, California and Watertown, Massachusetts. Bohjalian will be having a Capitol Hill Debut of the book in Washington D.C., co-hosted by Congressional Armenian Genocide Resolution lead sponsors, Representatives Robert Dold (R-IL) and Adam Schiff (D-CA). Bohjalian will be meeting with Congressional members throughout the day on August 1, 2012 and then offering remarks and signing books beginning at 6 p.m. at the Rayburn House Office Building, Room B-369.

The complete roster of events across the country is http://www.chrisbohjalian.com/events.

In his 15th book, “The Sandcastle Girls,” Bohjalian brings us on a very different kind of journey.  The spellbinding tale travels between Aleppo, Syria in 1915 and Bronxville, New York in 2012 – a sweeping historical love story steeped in the author’s Armenian heritage, making it his most personal novel to date.

Armenian Americans and interested readers are encouraged to purchase “The Sandcastle Girls” online from Amazon.com, Barnes and Noble and Indiebound or from their local book sellers.

To join the ANCA in helping put “The Sandcastle Girls” on the Congressional summer reading list through a contribution to the ANCA Endowment donate-a-book program – .

Oprah.com Book of the Week Announcement

Book of the Week: The Sandcastle Girls

Each week, we’ll be letting you know about new releases the editors of O and Oprah.com couldn’t stop reading. This Monday, we’re bowled over by the new novel:

Best known for his thrillers like Midwives, Chris Bohjalian has come out with a different kind of page turner—a searing, tautly woven tale of war and the legacy it leaves behind. The novel is actually two stories in one: That of Elizabeth Endicott and Armen Petrosian, lovers who meet in Syria during the Armenian genocide, and that of Laura Petrosian, their adult granddaughter, who, nearly a century after her grandparents met, wants to make sense of why they were so silent about their youth. Laura’s suburban existence is radically different from the violent setting in which her grandparents fell in love. Yet all three want the answer to one question: After such horror, is any kind of  happiness possible? As a reader you want so badly for Bohjalian’s passionate characters to find some version of yes. And find it they do—but at a terrifying cost. This rendering of one of history’s greatest (and least known) tragedies is an nuanced, sophisticated portrayal of what it means not only to endure, but to insist on hope.