On The Road To Exile – Aram Andonian 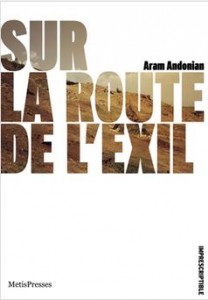 (imprescriptible.fr) Aram Andonian was born in 1876 in Constantinople. Journalist, writer and author of the Complete Illustrated History of the Balkan War (Vol. 1-4, 1912–1913, Histoire de la Guerre des Balkans), published originally in Armenian. He was among the Armenian intellectuals of Constantinople that were arrested on Apri l 24, 1915 and which later was deported and almost uprooted. A survivor of the Genocide in exile, he was the first Director of Nubar library. Andonian dedicated the rest of his life in collecting and publishing testimonies that showed the destruction of the Ottoman Armenians. He passed away in Paris in 1952.
Hervé Georgelin is a historian and an Armenian and Modern Greek languages translator. He has translated Andonian’s In Those Dark Days (En ces sombres jours, Métispresses, 2007) and Zaven Biberian’s The Twilight of the Ants (Le crépuscule des fourmis, Métispresses, 2012). Georgelin is also the author of The End of Smyrna. From cosmopolitanism to nationalisms (La fin de Smyrne. Du cosmopolitisme aux nationalismes, CNRS Éditions, 2005).

On the Road to Exile (Sur la route de l’exi) is the description of a survivor who couldn’t have survived.
Andonian places us in the center of this group of teachers, artists, journalists, merchants, politicians who are the intellectual and active elite of the Armenian community in Constantinople. Initially incredulous as to the true motives of the Young Turks government, this elite ends up eliminated in central Anatolia.
While portraying a culture in suspension through its most notable characters, the text refers to the early stages of the annihilation process, where the lies of executioners mask the worst to come.
Andonian follows the trace of his friend Parsegh Chahbaz, an investigative journalist until the latter gets murdered. From Istanbul to Kharpert Aram Andonian tries to restore his friend’s wandering and give the reader the picture of the mass destruction around him.