(horizonweekly.ca) – Q- You are a staunch researcher of the Armenian Genocide archives in the foreign press. How did you start this mission?
A-I am not sure if I should be called a staunch researcher since this is not my field of study. I am perhaps an avid reader of news, which then turned into a mission. Now as a volunteer, I do daily compilations for the Armenian News Network Groong and post the latest news on Armenia and Armenians printed in the foreign press. Whenever I am on “holiday” from teaching, I read the old newspapers. 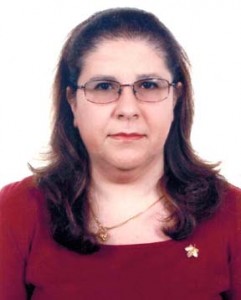 This interest with archival news started years ago when I was doing my graduate studies in Halifax, Nova Scotia. The province’s Archives library was very near Dalhousie University where I was studying. On a cold April afternoon, after submitting a draft of my thesis to my professor, I just went into the library to check if any Canadian newspaper had printed anything about the massacres. What also raised my curiosity was the New York Times compilation by the late Richard Kloian. I was first surprised that nothing was printed in April 1915, but I didn’t give up. My research with one Nova Scotian newspaper, The Halifax Herald, compiled over 250 items from the mid-1890s, 1909 and then from 1915-1922.

Q- You have just published a new book, The Times of the Armenian Genocide: Reports in the British Press (1914-1923), how did you manage to collect all the archival information?
A- For this book, I collected material from the following British newspaper: The Times , The Sunday Times, and The Manchester Guardian [currently known as The Guardian]. I read page by page the microfilm images of the old newspapers at different libraries, depending on where I would be at the time. This was a 12-year project and I’ve used the Reference Library in Toronto, the British Library in London (UK), and the American University of Beirut Library in Lebanon. All three libraries have the microfilms of The Times, so it was easy to keep going without much interruption during those 12 years. However, only the British library carried The Guardian microfilms; therefore, my trips to London were specifically to work on that paper.Of course there are many more British newspapers which were printed in the late 19th centure and early 20th century; it would take decades for one person to find and collect all. The British Library’s newspaper branch at Colindale, north of London, has over 30,000 newspapers, including the hundreds of newspapers printed in the British Empire as well as thousands from around the world in almost all languages. But it will need a large group of dedicated people to collect most, if not all.
The reason I chose those two major papers is that The Times had the widest circulation at the time, in and out of Britain. It was the paper that officials referred to most, and it recorded parliament debates and sessions; on the other hand, after much examination into a number of British papers, The Guardian was chosen because, in a number of cases, it filled some gaps with more news from the stricken regions, perhaps because a substantial Armenian community lived in Manchester at the time due to Armenian traders.
Each month took me 2 to 3 hours to skim through every page. Once an item was found on the microfilm, which was in many cases not very legible due to scratches from over-use, I made hard copies. Only in the past couple of years did the Toronto Reference Library install computerized microfilm readers, so it was easy to save the images of the pages or articles on a USB flash. And because these micorfilms were not clear enough to the untrained eyes, I re-typed each.

Q- Is this the first time those archives have been come to light?
A- I believe this book is the first to compile the British newspaper items completely & chronologically. There are those who have written about the British response to the on-going massacres, but their sources were different.
What is interesting in this book is that the reader is transported to those days, reads a newspaper article which is written in a very straightforward manner and which describes events and expresses opinions without much convoluted analysis as many history books do; with this book, the reader lives the day-to-day events of that region. There are many details that historians might skip as they would deem it unrelated to their main thesis. Not this book. The reader of these newspaper items will read names of small villages that were wiped out, instead of only the names of the major towns, cities or vilayets. Many times these articles mention names of regular individuals, not necessarily officials. The opinions of the editors regarding events or parliament debates or even the peace negotiations shed interesting light to the reader. In addition, letters to the editor written by some Armenians, but mostly by British citizens and officials, also shed some light on the British response to the massacres and condition of the refugees and orphans; these items would not be included by historians.

Q- Please tell us about your parental ancestral history.
A- Both my grandparents Peltekian & Malatjalian as well as one grandmother Panikian were from the town of Chork Marzban (or DortYöl) along the shores of the gulf of Iskenderoun. The Peltekians owned acres of orange groves in DortYöl , and my great grandfather owned a mill. Although most of the Peltekian family were massacred or died along the deportation route to the Syrian desert, my grandfather survived because he was forced into military service, but as a tailor, and was transferred first to Constantinople and then to Nablus in Palestine. After the end of WW1, those who survived returned to DortYöl in 1919. My paternal grandparents married and lived in the neighborhood of Özerli. But with the French withdrawal from most of Cilicia and the renewal of the massacres, my paternal grandparents as well as many compatriots decided to leave again and go to Iskenderoun. When living conditions again became difficult, my grandparents again left for Damascus (Syria) and then to Amman (Jordan) and Jerusalem.
Of my maternal grandfather Malatjalian, we do not know much. He and two siblings were left orphans, then transported to Cyprus and from there to Jerusalem. Along this route, he was separated from his younger siblings and until the day he died, he did not know what had become of them. He was told they died along the way.
After finishing school, my father also learned tailoring, opened his own shop in Amman where he became the tailor to the kings and prime ministers of Jordan, in addition to many princes of the Arab gulf, including the father of the billionaire Prince Waleed bin Talal. [note: Prince Talal, a brother of the king of Saudi Arabia, had told my father that he, the prince, was proud of having an Armenian mother. One of King Saud’s wives was a young Armenian girl who had reached the deserts of the kingdom.] When my parents married, they decided to move to Lebanon where my three brothers and I were born.

Q- Do you intend to publish your research book ‘’Heralding of the Armenian Genocide: Reports in the Halifax Herald 1894-1922’’ online?
A- Before I embark on any project, I need to recoup my life savings. Both books were published with personal funds, without any financial or moral support from any Armenian or non-Armenian sources. I would first like to print the over 2,500 articles from The Times of 1875-1913 before I re-print the Heralding book. If anything has to be published soon, it needs a full-time commitment, a commitment I cannot make for the time being. For now, it remains just a hobby to read and collect. I do not know when or if the remainder will be put in print for others to read and learn.

YEREVAN (ArmRadio)—The Turkish-language version of Verzhine Svazlian’s book, Armenian Genocide: Testimonies of Eye-Witness Survivors, has been published by Begle publishing house, headed by Ragip Zarakolu. The Turkish publisher was in Yerevan Tuesday to participate in the book’s Turkish-language release.

The Armenian and English publications of the book were released earlier. The book includes at least 700 testimonies of eye-witness survivors and historic songs.

Starting in 1955, Verzhine Svazlian has been writing down, recording and publishing the testimonies of genocide survivors from Armenia and the diaspora from more than 150 settlements of historic Armenia. She has dedicated 55 years to save the tragic and heroic excerpts in the history of the Armenian people.

Zarakolu was the first to decide to break the wall of denial in Turkey. He founded his own Begle publishing house in Istanbul in 1976, where he published a number of books on the harassment against national minorities in Turkey, as well as the Armenian Genocide.

Zarakolu has often been persecuted in Turkey for his activity, but it has not prevented him from publishing Verzhine Svazlian’s book. Asked whether he’s not afraid to return to Turkey, the publisher said: “I cannot go against my conscience. At the same time I don’t think the Turkish authorities will launch a criminal case against me this time. Experience has shown that these attempts never succeed.”

“Verzhine Svazlian’s name is known to many in Turkey as a ‘pedestal of irrefutable truth.’ This book could become the statue standing on that pedestal. In Turkey the ice is starting to melt and the number of people seeking truth is increasing,” Ragip Zarakolu said.

Director of the Oriental Studies Institute Ruben Safrastyan is confident that Verzhine Svazlian’s book will have a great influence on Turkish society.