“Keep Turkey on our side …
whether as a result Armenians do perish or not.”
The German ambassador in Constantinople, Count Paul Wolff-Metternich, wrote to the Imperial Chancellor, Theobald von Bethmann Hollweg, in Berlin on December 7, 1915: 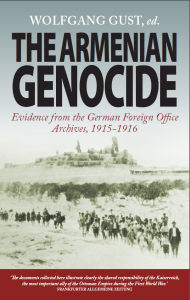 … Our displeasure over the persecution of the Armenians should be clearly expressed in our press and an end be put to our gushing over the Turks. Whatever they are accomplishing is due to our doing; those are our officers, our cannons, our money… In order to achieve any success in the Armenian question, we will have to inspire fear in the Turkish government regarding the consequences. If, for military considerations, we do not dare to confront it with a firmer stance, then we will have no choice but… to stand back and watch how our ally continues to massacre.

The proposed public reprimand of an ally in the course of a war would be an act which is unprecedented in history. Our only aim is to keep Turkey on our side until the end of the war, no matter whether as a result Armenians do perish or not.

Toronto—The Zoryan Institute is pleased to announce that the long-awaited English edition of The Armenian Genocide: Evidence from the German Foreign Office Archives, 1915-1916, compiled and edited by Wolfgang Gust, has just been released by Berghahn Books. It contains hundreds of telegrams, letters and reports from German consular officials in the Ottoman Empire to the Foreign Office in Berlin which describe in graphic and shocking detail the unfolding genocide of the Armenians. The documents provide unequivocal evidence of the genocidal intent of the Young Turks and the German government’s official acquiescence and complicity.

Upon the earlier release of the German and Turkish editions of the book, the media reacted emphatically:

Frankfurter Allgemeine Zeitung [Germany]—“The documents collected here illustrate clearly the shared responsibility of the Kaiserreich, the most important ally of the Ottoman Empire during the First World War… They are therefore largely undisguised and so vivid that the reader often shudders when reading them.”
Forum Wissenschaft [Germany]—“Wolfgang Gust documents, in this excellent political-historical edition from contemporary German sources and the Foreign Office of the Reich government, the murderous events themselves…as well as the political co-responsibility of the German state.
Hurriyet Daily News [Turkey]—“If you read the book and look at the documents, if you are a person who is introduced to the subject through this book, then there is no way that you would not believe in the genocide and justify the Armenians.”

The exceptional importance of these documents is underscored by the fact that only German diplomats and military officials were able to send uncensored reports out of Turkey during World War I. Apart from the Americans, who remained neutral in the war until April 6, 1917, German diplomats and their informants from the missions or employees of the Baghdad Railway were the most important non-Armenian eyewitnesses of the Genocide. These documents, meant strictly for internal use and never intended for publication, are remarkable for their candid revelations. Even as allies of the Ottoman Empire, German officials still felt compelled for moral and political reasons to report and complain about the atrocities being committed against the Armenians by their Ottoman ally.

In describing how he came to undertake this massive project, Gust writes,
…….I was shocked to see the Germans again playing an important role in mass murder at the edge of Europe. This genocide was neither initiated nor committed by Germans, but was widely accepted by them. Imperial Germany was the closest ally of the Young Turks and had a formal military alliance with them. Was there a link between these two most important genocides in Europe? Did the Nazis copy the methods of the Young Turks, who had committed the Armenian Genocide? Were the two World Wars in reality one historical event, as some historians believe?
Questions upon questions. Was Imperial Germany a driving force in the genocide of the Armenians, or possibly even the source of the idea, as some non-German historians have suspected…. Did Imperial Germany view the Armenian Genocide with indifference or with sympathy? Did some Germans or part of the leading class resist the deportations and mass killings? And finally, did Germany have the power to stop the Armenian Genocide, and if they were able to so, why did they not make use of this power?

The answers to these questions are found in this prodigious 800-page collection. For more information about the book, please contact the Zoryan Institute zoryan@zoryaninstitute.org or telephone 416-250-9807.

The Zoryan Institute is a non-profit, international center devoted to the research and documentation of contemporary issues with a focus on Genocide, Diaspora and Homeland. The Zoryan Institute through its division, the International Institute for Genocide and Human Rights Studies, runs an annual course in comparative genocide studies in partnership with the University of Toronto and is co-publisher of Genocide Studies International in partnership with the University of Toronto Press. For more information please contact the Institute by email zoryan@zoryaninstitute.org or telephone 416-250-9807.