The Legislative Assembly of the State of Paraná, Brazil, passed a law recognizing the Genocide of the Armenian people. The draft law which was submitted by deputy Ney Leprevost and was signed by Governor Beto Richa, came into effect on March 28.

In the supporting text of the law, Leprevost had written “The recognition of the Armenian Genocide by the Legislative Assembly of Paraná would ease the suffering of millions of Armenians scattered throughout the world and Turkey would become more aware of its past.” 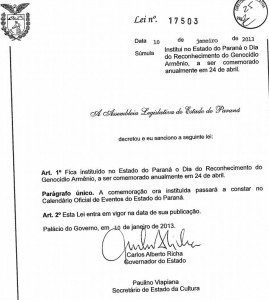 According to the law, April 24 is set as the Armenian Genocide Remembrance Day and will henceforth be included in the official calendar of events of the State of Paraná.