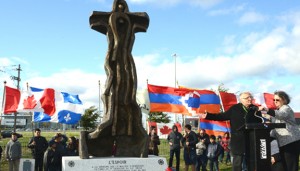 With this unveiling, the Canadian-Armenian community renewed its dedication and commitment to our national demands and to the Armenian Cause.

Leaders of all Armenian denominations gathered at the monument, called “Crucifixion, Resurrection, Rebirth,” and performed the religious blessing ceremony, while community leaders, among them the chairman of the Joint Monument Committee, Sako Yacoubian, committee member, Hovig Tufenkndjian and chairman of Canada’s Genocide Centennial Committee, Mher Karakashian all expressed the Canadian-Armenian community’s commitment to justice.

The monument’s creator, sculptor Arto Tchakmakdjian, said the meaning of the monument is hope.

Also speaking at the event was Armenia’s Ambassador to Canada Armen Yeganian who called on the international community to recognize the Armenian Genocide.

Local, regional and federal officials, past and present, were in attendance at the event and spoke about the need for the recognition of the Armenian Genocide and condemned the government of Turkey for its continued denial of the crime.