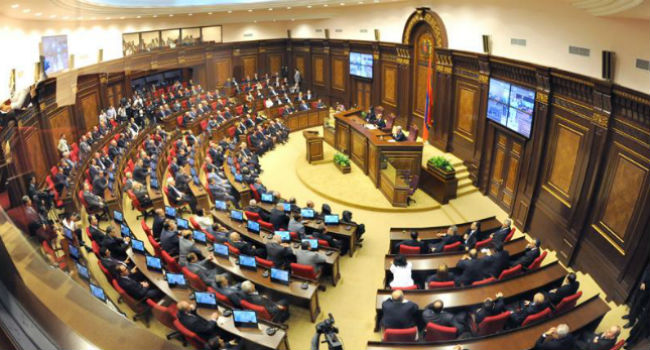 (source: Civilnet.am) The Republic of Armenia’s National Assembly unanimously voted to adopt a statement recognizing and condemning the genocide of the Greeks and Assyrians by Ottoman Turkey at the beginning of the 20th Century. A standing ovation by all members of parliament followed the adoption of the statement on March 24.

Armenian lawmakers had drafted the statement after consultations with members of Armenia’s Greek and Assyrian communities.

The statement passed in Armenia’s parliament “Condemning the Genocide Against the Greeks and Assyrians during 1915-1923 by Ottoman Turkey” reads:

The National Assembly of the Republic of Armenia:

guided by the December 11, 1946 UN General Assembly Resolution 96 (1), the December 9, 1948 resolution on the “Prevention and Punishment of the Crime of Genocide,” the November 26, 1968 UN Convention on the “Non-Applicability of Statutory Limitations to War Crimes and Crimes Against Humanity,” as well as all other international instruments on human rights with the their principles and provisions,
noting the centuries-long friendship between the Armenian, Greek and Assyrian people,

that it condemns the genocide committed against the Greek and Assyrians during 1915-1923 by Ottoman Turkey.

The Greek and Assyrian Genocides followed the Ottoman Empire’s policy of ethnic cleansing and genocide against its Christian subjects during World War I. Like the Armenians, the Greeks and Assyrians were deported and massacred as many cultural, religious and historical sites relating to both ethnic groups were destroyed.

According to the Rutgers University Center for the Study of Genocide and Human Rights, approximately 750,000 Assyrians died, which was three-fourths of the ethnic group’s pre-war population. Many survivors dispersed across the Middle East after the genocide.

The Assyrians continued to face adversity after World War I when 3,000 men, women and children were massacred by Iraqi troops in the northern Iraq town of Simele in 1933 and even today in the aftermath of the 2003 Iraq War and the current threat posed by ISIS forces.