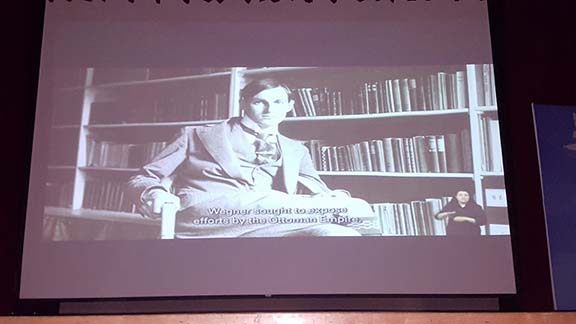 The event took place at the Armenian Youth Centre of Toronto and attracted hundreds of community members and supporters of the ANCC and CMHR. The event was also attended by Peter Farenholtz, Consul General of Germany in Canada, MP Arnold Chan. Member of Parliament for Scarborough-Agincourt and Chair of the Canada-Armenia Parliamentary Friendship Group, Councilor Jim Karygiannis, Toronto City Councilor, TDSB Trustees and a large number of activists.

After the screening of the documentary, the event featured a discussion with renowned Canadian filmmaker Atom Egoyan, who narrated the short documentary which will play in the Museum’s “Breaking the Silence” gallery.

Subsequently, remarks were delivered by CMHR president and CEO, John Young, MP Arnold Chan – who also read a statement from The Right Hon. Justin Trudeau – and Councilor Jim Karygiannis, Toronto city councilor. Closing remarks were delivered by ANCC president, Shahen Mirakian. In his remarks, Mirakian said that it is only through our concerted efforts that we can stay true to our commitment and carry on the legacy of Wegner by standing up against any forms of injustice towards humanity.

The film “Acts of Conscience” looks at the genocide through the lens of Armin T. Wegner, a German war medic who photographed and documented atrocities against the Armenian-Christian minority that were occurring around him in the Ottoman Empire during the first World War – including forced “death marches” through the desert. In the 1930s, Wegner also voiced his opposition to the anti-Semitic policies of the Nazis and authored an impassioned plea to Hitler on behalf of the Jews of Germany.

Compelled by his conscience to take action despite great personal risk, Wegner’s story epitomizes the importance of efforts to combat the denial and minimization that often surround gross human rights violations.

The ANCC is the largest and the most influential Canadian-Armenian grassroots human rights organization. Working in coordination with a network of offices, chapters, and supporters throughout Canada and affiliated organizations around the world, the ANCC actively advances the concerns of the Canadian-Armenian community on a broad range of issues and works to eliminate abuses of human rights throughout Canada and the world. 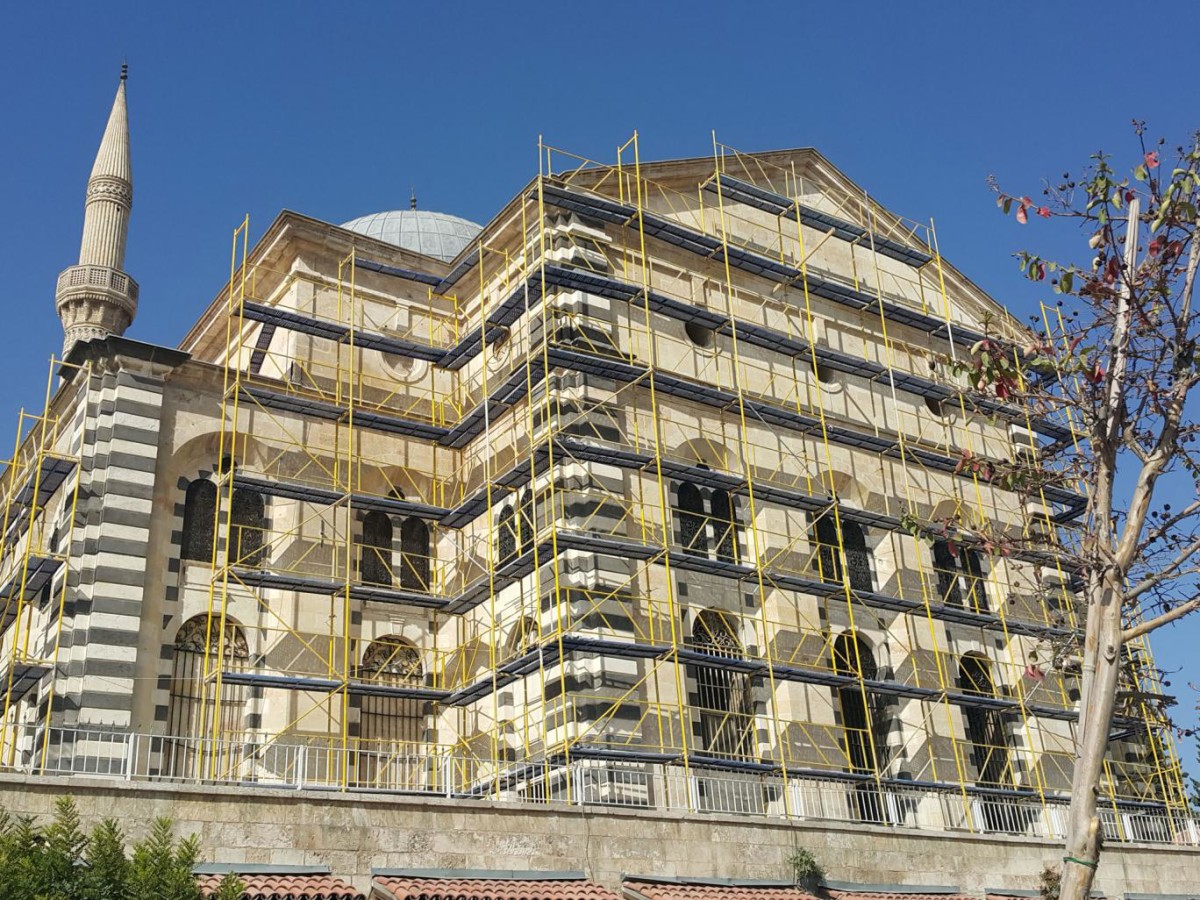 
The city of Gaziantep and the ‘Liberation’ mosque is a milestone on the journey between one great crime of the 20th century, and another seen during the Second World War

(independent.co.uk) The ‘Liberation’ Mosque is a fine, neo-classical, almost Gothic construction with striped black-and-white stone banding, unusual for a Muslim holy place but a jewel in the Tepebasi district of the old town of Gaziantep. Its stone carvings and mock Grecian columns beside the window frames are a credit to another, gentler age. The minarets perch delicately – and I had never seen this before – on square towers that might have been church towers had there been Christians in this ancient city.

But of course, there were. What no-one will tell you in Gaziantep, what no guidebook mentions, what no tourist guide will refer to, is that this very building – whose 19th century builders were none other than the nephews of the official architect of Sultan Abdulhamid II – was the Holy Mother of God cathedral for at least 20,000 Christian Armenians who were victims of the greatest war crime of the 1914-18 war: the Armenian genocide. They were deported by the Ottoman Turks from this lovely city, which had been their families’ home for hundreds of years, to be executed into common graves. The murderers were both Turks and Kurds.

Altogether, up to 32,000 Armenians – almost the entire Christian population of 36,000 of what was then called Antep – were deported towards the Syrian cities of Hama, Homs, Selimiyeh, to the Hauran and to Deir Ezzor in 1915. The Muslim citizens of Aintep then apparently plundered the empty homes of those they had dispossessed, seizing not only their property but the treasures of the cathedral church itself. Indeed, the church, ‘Surp Asdvazdadzin Kilisesi’ in Armenian, was turned into a warehouse – as were many Jewish synagogues in Nazi Germany and in Nazi-occupied eastern Europe during the Second World War – and then into a prison.

Prowling around the church-mosque enclosure, I found some of the prison bars still attached to the window frames, although the building has been functioning as a mosque since 1986. The main gate was closed but I pushed it open and found not only that the structure of the magnificent building is still intact but that scaffolding has been placed against the walls for a renovation. Behind the church – and separate from the building – was an ancient stone cave whose interior was blackened with what must have been the smoke of candle flames from another era, perhaps a worshipping place because the cave appears to have been a tomb in antiquity. The caretaker came fussing up to us to tell us that the mosque was shut, that we must leave, that this was a closed place. But he was a friendly soul and let us take pictures of the great façade of the church and of the minarets.

The only sign of its origin is the date “1892” carved in stone on the east façade of the original church, marking the final completion of the work of the great Armenian architect Sarkis Balian – he was the official architect of the 19th century Sultan Abdulhamid II, a terrible irony since Abdulhamid himself began the first round of Armenian massacres of 80,000 Christians (the figure might be 300,000) in Ottoman Turkey just two years after the Armenian stonemason Sarkis Tascian carved the date on the façade. In the later 1915 Armenian Holocaust – even Israelis use this word for the Armenian genocide – a million and a half Armenians were slaughtered by the Turks. It is a shock to realize that Aintep’s vast toll of dead were only a small fraction of this terrifying war crime.

Outside the church, I found an elderly Syrian refugee sitting on the pavement by the closed gate. He greeted us in Arabic and said that, yes, he knew this was once a church. Just over a century ago, the Arabs of northern Syria – the land now occupied by Isis – were among the only friends the Armenians found in the vast deserts into which they were sent to die. Some took Armenian children into their homes. Others married Armenian women – the degree of coercion involved in this ‘charitable’ act depends on the teller — although more than twenty years ago I met a Syrian man and his ‘converted’ Armenian wife near Deir Ezzor, both around a hundred years old and both of whom has lost count of their great-great-grandchildren.

A Turkish man in a shop below the cathedral was less generous. Yes, it had been a church, he said. But when I asked him if it had been an Armenian church, he chuckled – dare I call it a smirk? — and looked at me, and said nothing. I suppose a kind of guilt hangs over a place like this. So it is a happy thought that some Armenian families have in recent years – as tourists, of course – visited the city that was once Antep and have spoken with warmth to members of Turkey’s leftist parties and celebrated the work of American missionaries who cared for both the Armenian and Turkish Muslim population here before 1915. One Armenian identified his old family home and the Turkish family who lived there invited him in and insisted that he should stay with them and not in a hotel. For this was also his home, they said.

But tears of compassion do not dry up the truth. For when the First World War ended, Allied troops marched into Antep. First came the British, led by the execrable Sir Mark Sykes – of Sykes-Picot infamy – and then the French in October 1919, who brought with them, alas, elements of the Armenian volunteers who had joined their ‘Legion d’Orient’ in Port Said. The Muslim elites who had taken over the town – and the Armenian homes and properties – feared the newcomers would demand restitution. Fighting broke out between Muslims and the French and their Armenian allies and the Muslims discovered a new-found enthusiasm for the independence struggle of Mustafa Kemal Ataturk. Thus began the false history of the city.

Perhaps the greatest font of knowledge on this period is a young Harvard scholar, Umit Kurt, of Kurdish-Arab origin, who was born in modern-day Gaziantep. Mr Kurt is now an academic at Harvard’s Center for Middle East Studies and wrote his doctoral dissertation on the Armenians of Antep from the 1890s with a special focus – this is the important bit for readers – on property transfers, confiscation, deportation and massacres. Mr Kurt’s conclusion is bleak.

“The famous battle of Aintab [sic] against the French,” he says, “…seems to have been as much the organised struggle of a group of genocide profiteers seeking to hold onto their loot as it was a fight against an occupying force. The resistance…sought to make it impossible for the Armenian repatriates to remain in their native towns, terrorising them [again] in order to make them flee. In short, not only did the local…landowners, industrialists and civil-military bureaucratic elites lead to the resistance movement, but they also financed it in order to cleanse Aintab of Armenians.”

They were successful. The French abandoned Antep in December 1919 and the Armenian volunteers fled with them. The new Turkish state awarded the Muslim fighters of the city with the honourific Turkish prefix ‘Gazi’ – “veterans” – and thus Antep became Gaziantep and the great church of old Sarkis Balian would eventually be renamed the ‘Liberation Mosque’ – “Kurtulus Cami” – to mark the same dubious victory over the French and Armenians, the latter being defamed as killers by those who had sent the Armenians of the city to their doom in 1915.

Not much justice there. Nor in the official Turkish version of that terrible history of the Armenian Holocaust in which – this is the least the Turkish government will concede – Armenians died ‘tragically’ in the chaos of the First World War, as did Muslims themselves. German military advisers witnessed the genocide. Hitler was later to ask his generals, before the invasion of Poland and the destruction of its Jews, who now, in 1939, remembered the Armenians. The official Turkish account of the fate of Gaziantep’s original Armenians refers to their “relocation” – a word used by the Nazis when they sent the Jews to their extermination in eastern Europe.

No, we shouldn’t contaminate the Turks of modern Turkey with the crimes of their grandfathers. Umir Kurt wrote his dissertation for the brilliant and brave Turkish historian Taner Akcam, whose work on the Armenian genocide has revolutionised historical scholarship in Turkey. Last year, President Recep Tayyip Erdogan deliberately moved the date of the 1915 Gallipoli commemorations to the very day of the anniversary of the start of the Armenian genocide in an attempt to smother any memory of the crime – but the government allowed Armenians to parade through Istanbul in honour of their 1915 dead. Yet if the historical narrative from the 20th century’s first holocaust to its second holocaust is valid, then the path upon which the first doomed Armenians of Antep set out in their convoy of deportation on 1st August 1915 led all the way to Auschwitz. The ‘Liberation’ Mosque is a milestone on the journey.