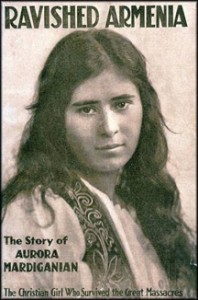 (horizonweekly.ca) – The Turkish version of “Ravished Armenia” by Armenian Genocide survivor Arshaluys Mardiganian has been published in Turkey.

Arshaluys Mardiganian’s “Ravished Armenia” has been translated into Turkish language by the former worker of Istanbul-based “Agos” periodical Tiran Lokmagyozyan. The book was publishrd by Turkish Pencere Yayınları publishing house.

Taraf’s columnist Özlem Ertan reflected upon the Turkish version of the book and stated that this is a must read book. Among other things Özlem Ertan underscored: “One must read Arshaluys Mardiganian’s book to get in touch with the painful phantoms of the past and to listen to the voice of conscience.”

Aurora Mardiganian was the daughter of a prosperous Armenian family living in Chmshgatsak (Çemişgezek), twenty miles north of Harput, Ottoman Turkey. Witnessing the deaths of her family members and being forced to march over 1,400 miles, during which she was kidnapped and sold into the slave markets of Anatolia, Mardiganian escaped to Tiflis (modern Tbilisi, Georgia), then to St. Petersburg, from where she traveled to Oslo and finally, with the help of Near East Relief, to New York.

In New York, she was approached by Harvey Gates, a young screenwriter, who helped her write and publish a narrative that is often described as a memoir titled Ravished Armenia (full title Ravished Armenia; the Story of Aurora Mardiganian, the Christian Girl, Who Survived the Great Massacres (1918).[1]

The narrative Ravished Armenia was used for writing a film script that was produced in 1919, Mardiganian playing herself, and first screened in London as the Auction of Souls. The first New York performance of the silent film, entitled Ravished Armeniatook place on February 16, 1919, in the ballroom of the Plaza Hotel, with society leaders, Mrs. Oliver Harriman and Mrs. George W. Vanderbilt, serving as co-hostesses on behalf of the American Committee for Armenian and Syrian Relief.

Mardiganian was referred to in the press as the Joan of Arc of Armenia, describing her role as the spokesperson for the victims of the horrors that were then taking place in Turkey and the catalyst for the humanist movement in America. In the 1920s Mardiganian married and lived in Los Angeles until her death on February 6, 1994.