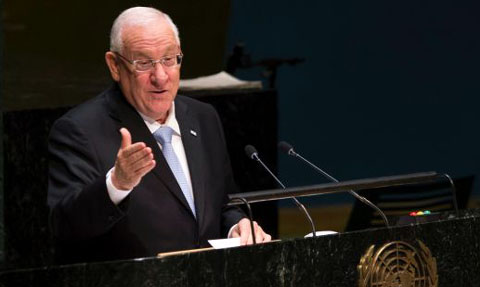 Haaretz – Israel President Reuven Rivlin told the UN General Assembly on Wednesday that “cynical” accusations against Israel of genocide and war crimes harm the world body’s ability to fight the real thing. Speaking at the assembly’s ceremony marking International Holocaust Remembrance Day, Rivlin mentioned the 1915 Armenian Genocide – the killing of more than one million Armenian nationals by Turkey – which is not recognized as genocide by Israel.

Rivlin called on the United Nations to set red lines beyond which it would intervene to stop acts of genocide. He then said:”At the same time we must remember that the setting of red lines requires us to stop diluting and cynically exploiting them in the name of pseudo objectivity, as is done in the rhetoric of human rights with the use of terms such as ‘genocide’ for political purposes.”

“Nonetheless, absurd comparisons such as this one, which we as Israelis are exposed to constantly… not only confuse the ally with the enemy, but they undermine this house’s ability to effectively fight the phenomenon of genocide.”

In his introduction, delivered in English, Rivlin called attention to the current clashes in the north, saying they represented Israel’s fight against the global challenge of “terrorism.”

“I stand before you at a time of great tension in our region. My heart and my thoughts are with my people in Israel. Terrorism does not distinguish between blood. In this war, all of us, all the nations united, countries of the free world, must form a united front,” Rivlin said.

He delivered the body of his speech in Hebrew – “the same language in which my fellow Jews cried ‘Shma Yisrael’ as they were marched to the gas chambers. The language of my brothers and sisters, whose memory we honor today.”