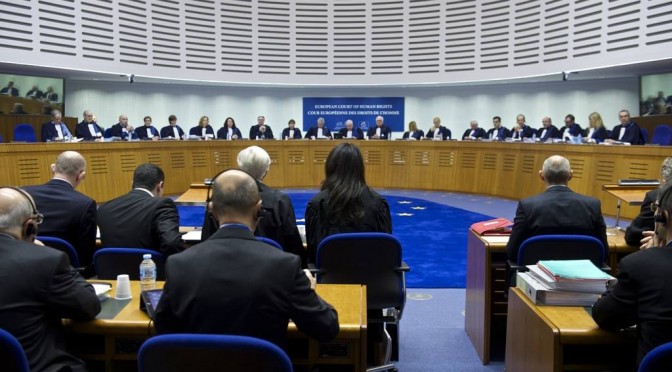 (armenianweekly.com) STRASBOURG (A.W.)—The European Court of Human Rights (ECHR) held a Grand Chamber hearing on Jan. 28, in the case of Dogu Perincek v. Switzerland. The case stems from a Swiss court verdict that in 2007 fined Perincek, a Turkish ultranationalist activist and chairman of Turkey’s Workers’ Party, over his 2005 statement calling the Armenian Genocide an “international lie.” In appealing to the ECHR, Perincek’s defense argued that the Swiss court violated Perincek’s right to freedom of expression; the court ruled in their favor in 2013. On March 7, 2014, Switzerland filed an appeal, which led to today’s hearing.

In his statements, Robertson said that Perincek is “a genocide denial forum shopper,” and that “He seeks out countries in Europe where he can be convicted and by so doing promote himself and his perverse view of history.” Robertson also referred to Perincek as a “vexatious litigant” and a “pest.”

Mehmet Cengiz, representing Dogu Perincek, presented before the court first, and argued that Perincek’s motives were not of a racist nature, but that his statements were in essence a legal assessment of the “1915 events.”

“Dr. Perincek made a legal assessment. He did not ignore the massacres and the deportations; he did not deny the actus reus of the 1915 events. The dispute between the parties concerns the legal definition of the tragic events that took place a hundred years ago in the Ottoman Empire. Mr. Perincek defends that these events cannot be defined as a crime of genocide. Perincek rejects the judicial qualifications of the events as genocide and bases his opinions on the 1948 UN genocide convention,” said Cengiz, who also claimed that there is no consensus on the genocide. “Mr. Perincek made similar statements in both Germany and France and did not face similar charges,” he said.

Cengiz argued that Perincek had no racial motives, having spent his life countering racism. “You can seek many motivations, many intents… but even if you sought for 1,000 years, you won’t find a racist intent because Dr. Perincek has spent his lifetime fighting against racism, this is why he has served 14 years in prison… Take a look at his files: in every case he fought against racism.”

Perincek, on the other hand, spoke about “Europe’s tradition and heritage of liberty.” “Freedom of expression means liberty for different, even deviating opinions, and freedom is needed for those who oppose the status quo. If circulating opinions and prejudices cannot be discussed then there is no freedom,” said Perincek, adding, “We need to make sure we rid ourselves from the negative effects of judgements, opinions, which dates back to the First World War. The consciousness, the thinking of the Europeans about the event of 1915 should not be surrounded and besieged by prohibitions. Let us secure the freedom to access the truth.”

Perincek also spoke about “90 kilos” of documents that his team submitted to the court as evidence in an attempt to prove why the Armenian Genocide should not be labeled as such.

Perincek spoke about “the pain” he “shares” with the Armenian people, while claiming that massacres and forced deportations were “mutual” in the Ottoman Empire.

“Let us protect peace and brotherhood in Europe, in Turkey. The accusation of the Armenian Genocide has turned into a taboo, it’s turned into a tool to discriminate against Turkish people, to humiliate Turks,” said Perincek, adding, “Today Turks and Muslims are the black people of Europe. Let also the oppressed ones defend themselves.”

Until two days before the hearing, Perincek was under a travel ban due to an ongoing Ergenekon related case against him. The Istanbul 4th High Criminal Court lifted the travel ban on Jan. 26. “Now, the [next step] is [for] the historical case in Strasbourg to finalize the lie of Armenian genocide,” read a statement released by the socialist Workers’ Party, which Perincek chairs, reported Turkish sources.

Christian Laurent Pech, also representing Perincek, said the trial was not about whether the proper characterization of what happened to the Armenians in 1915 is genocide. “In these troubled times, we find it important to recall that one of the main purposes of freedom of expression is to protect opinions that might not be popular whether in Switzerland, Turkey or elsewhere,” he said.

Representing the government of Switzerland, Frank Schurmann laid out reasons why his government believes that the Swiss court handed down “well-reasoned judgments reaching a perfectly justifiable result.” He argued that the lower court in reaching its verdict ignored the context in which Perincek’s statements were uttered. He forcefully argued that victims of genocidal crimes, as well as their descendants, deserve to have their rights legally protected from statements that were an assault on their human dignity.

“It is not denial per se which warrants punishment, but the hate and discriminatory intent that must also be present,” argued Schurmann. “Let us also recall the applicant’s identification with Talaat Pasha, one of the instigators of the fact in issue, found guilty by the court martial of the Ottoman Empire,” he said, and cited the intervention offered to the court in favor of Armenia by Turkish human rights organizations, which helped further place Perincek’s statements into a larger context.

Professor Daniel Thurer also spoke on behalf of the Swiss government, providing further arguments and in support of the Swiss court’s position.

Genocide denial can have ‘double impact’

Armenia’s Prosecutor General Gevorg Kostanyan presented the history of the Armenian Genocide and introduced Geoffrey Robertson QC to address the Grand Chamber. Robertson, who is representing Armenia on behalf of Doughty Street Chambers along with human rights barrister, Amal Clooney, provided the court with an in-depth historical background of the Armenian Genocide and warned about the dangers of genocide denial.

“Genocide denial can have double impact. It can make genocide survivors and their children and grandchildren feel the worthlessness and contempt and inferiority that the initial perpetrators intended,” said Robertson, adding that denial can incite, “admirations for those perpetrators and a dangerous desire to emulate them.”

While there was much debate from Perincek’s counsel that the defendant did not have discriminatory intentions, Robertson reminded the Grand Chamber that the Swiss court had, in fact, decided that Perincek’s motives were racist, and that “his words in the Turkish language were designed to arouse his supporters in Turkey to hate Armenians and to applaud his hero Talaat Pasha, the Ottoman Hitler.” Robertson made it clear that Perincek traveled to Switzerland with the purpose of being convicted; something that he had tried doing in France, Germany, and most recently in Greece.

According to Robertson, the denial of the Armenian Genocide is inherently insulting to all Armenians. While he called the Holocaust an “appalling example of the worst of crimes against humanity,” he stated that it is wrong to excuse or to minimize other mass murders on the grounds of race and religion because they have fewer victims or different methods of killing. “What matters to Armenians, and Jews, and Bosnians, and Bengalis to Rwandan Tutsis and today, Yezidis, is not the manner of their death or whether an international court has convicted the perpetrators, but the fact that they were targeted as unfit to live because they were Jews or Armenians or Yezidis,” he explained.

Clooney offered further historical background on the Armenian genocide, citing that, “the most important error by the court below is that it cast doubt on the reality of the Armenian Genocide that the people suffered a hundred years ago.” She argued that this finding on the genocide was not necessary in the case, that it was reached without a proper forensic process, and most importantly, that it was wrong.

“This court is not the forum and Mr. Perincek is not the case in which to determine state responsibility for the crime of genocide. But if this chamber were minded to make such a judicial determination, then Armenia must have its day in court. We would, in that case, welcome the opportunity to submit evidence, which we consider to be overwhelming, that the massacres that killed over a million Armenians would today be labelled as genocide,” said Clooney.

Clooney went on to criticize Turkey’s track record on violations of freedom of expression, calling it “disgraceful.” Speaking to the Grand Chamber, she outlined how the European Court of Human Rights had found against the Turkish government in 224 separate cases on freedom of expression grounds. She then made a reference to Hrant Dink who was prosecuted by Turkey and assassinated by a Turkish nationalist in 2007: “although this case involves a Turkish citizen, Armenia has every interest in ensuring that its own citizens do not get caught in the net that criminalizes freedom of speach too broadly and the family of Mr. Hrant Dink know that all too well.”

Clooney concluded her remarks by pointing out that Perincek and his colleagues on the Talaat Pasha Committee, a committee named after the principal perpetrator of the Armenian Genocide and deemed to be xenophobic by the European Parliament, “celebrated the judgement in its current terms, and triumphantly complained that it has solved the Armenian question once and for all.” According to Clooney, the comments on the lower court judgement, “dishonor the memory of the Armenians who perished under the Ottoman Empire a century ago and assist those who will deny the genocide and incite racial hatred and violence,” expressing hope that the chamber would, “set the record straight.”

Bedo Demirdjian, Communications and PR officer for the European Armenian Federation for Justice and Democracy (EAFJD), said that “denial of Genocide, inciting hate and making racist comments in Europe are not a right, but are crimes that should be punished accordingly.” EAFJD was involved in a supporting role to one of the third parties that intervened on behalf of Armenia.

Demirdjian, who followed the court hearings in Strasbourg, said that “Perincek’s defense tried to confuse the court by saying that he doesn’t refute the massacres of Armenians; acknowledges the pain suffered; and [argues] that Turks have also been killed, [which is why] we cannot give the Genocide [that] characterization. This is unacceptable to us: equating the victim and perpetrator. This is the official line of the Turkish state to whitewash their crime.”

Speaking to Yerkir Media a day before the trial, ARF Bureau member Mourad Papazian said, “We don’t think that the ECHR will side with Perincek and Turkey because truth is on our side.”

According to police, hundreds of Turkish protestors gathered outside the courthouse, carrying Turkish and Azeri flags, portraits of Ataturk, and banners. Some began cheering as Perincek emerged from the court.

“The protestors were primarily Turkish nationalists, Kemalists, and Perincek-sympathisers, who had come to the court in busses. In reality, their protest does not present any real value to the case, since their voices were not heard inside the court,” said Papazian, who is also the chairman of the Co-ordination Council of Armenian organizations of France (CCAF), and had attended the trial.

Armenian organizational representatives from across Europe as well as dozens of Armenians also gathered in front of the Human Rights Court building, calling for an end to genocide denial.

To watch the full video of the hearing, click here.