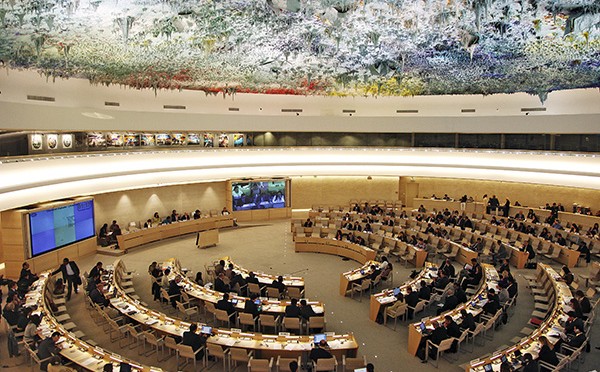 (asbarez.com) GENEVA—The 28th session of the United Nations Human Rights Council (UNHRC) adopted a resolution Friday on the prevention of genocide introduced by Armenia. Armenia’s Foreign Ministry reported that 64 states joined Armenia and became co-authors of the resolution. The resolution will be open for co-authorship for another two weeks.

The resolution, adopted in Geneva on March 27, affirms that impunity for the crime of genocide, war crimes and crimes against humanity encourages their occurrence and is a fundamental obstacle to the furtherance of cooperation among peoples and the promotion of international peace and security, and that fighting impunity for such crimes is an important factor in their prevention.

In addition, it emphasizing the responsibility of states to comply with their obligations under relevant international instruments to end impunity and, to that end, to thoroughly investigate and prosecute persons responsible for genocide, crimes against humanity, war crimes or other massive, serious or systematic violations of human rights and international humanitarian law, in order to avoid their recurrence and to seek sustainable peace, justice, truth and reconciliation.

It also condemns the intentional public denial or glorification of crimes of genocide and crimes against humanity as defined by international law, and notes with concern that public denials create a risk of further violations and undermine efforts to prevent genocide.

The resolution also recommends that the UN General Assembly designate December 9 as the International Day of Commemoration and Dignity of the Victims of Genocide in order to raise awareness of the Convention on the Prevention and Punishment of the Crime of Genocide and its role in combating and preventing the crime of genocide.