Does Grandfather Turn Over in his Grave, or is Turkey somehow in Part Moving Forward?

(GPN) – The grandson of one of the major executors of the Armenian Genocide Cemal Pasha, Hasan Cemal, has published a book entitled 1915: The Armenian Genocide. “To reject the Genocide means to be a part of the crime against humanity. Moreover, the pain of 1915 is not history, it is an up to date question,” says Cemal.

“One interesting piece of information provided in the book has to do with the late İlhan Selçuk, a columnist of the Cumhuriyet daily who has held great value for Kemalists. He has apparently never spoken of his Armenian mother. This is quite a remarkable example of how the Kemalist state has not only tried to cover up historical facts but also induced citizens to hide their ethnic origins.

The First Armenian News and Analyses observes: “Hasan Cemal’s book is significant in various respects. One aspect has to do with him being the grandson of Cemal Paşa, who was one of the leading figures in the Committee of Union and Progress (CUP) government that took the decision to forcefully deport nearly the entire Armenian population of the empire, and who was gunned down in revenge by Armenian nationalists in Tbilisi in 1921.” 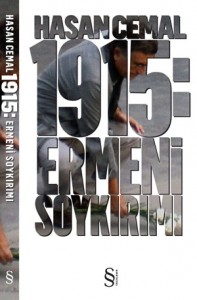 Speaking at UCLA a year ago, Cemal described his deeply moving 2008 visit to the Armenian Genocide Monument in Yerevan, where he laid three carnations in memory of his close friend, Hrant Dink, the Armenian journalist who was assassinated in Istanbul by a Turkish extremist. While visiting Yerevan, he had a startling encounter with Armen Gevorkyan, the grandson of the man who in 1922 assassinated his grandfather, Cemal Pasha.

Harut Sassounian, President of the United Armenian Fund and publisher of the California Courier reports: “Cemal described the progress made in Turkey during the past three decades on the recognition of the Armenian Genocide, going from total denial to an apology campaign, the restoration of Armenian churches, and holding academic conferences on this topic. He asked Armenians to come to Turkey to participate in the ‘recovery of memory.’ He urged them never to forget the past, without becoming its captives.”

Harut Sassounian concludes: “I found Cemal to be both candid and brave. He could have easily avoided the use of the term Armenian Genocide, maintaining that doing so could land him in jail. However, he made no excuses and used the genocide term several times. Considering his grandfather responsible for ‘the Great Catastrophe,’ he described today’s Turkey as ‘a manic-depressive country.’ “

Today’s Zaman, a Turkish newspaper, wrote about his experience upon returning to Turkey after a trip to the U.S.: “As soon as I stepped into the Istanbul Ataturk Airport, I rushed to a kiosk to buy Turkish newspapers. While I was handing over the money my eye caught a book on display, Hasan Cemal’s latest, “1915, Ermeni Soykırımı” (1915, Armenian Genocide). Seeing it here, on the display table of a kiosk in the domestic terminal of the airport, really surprised me.

“Just five to six years ago, writing an article on the ‘Armenian question’ would cause you to receive hundreds and hundreds of death threats. Today, a book with the title Armenian Genocide is on sale amongst the most popular bestsellers in Turkey. Something is really changing.

“So many paradoxical things happen in this country. Do not believe it if anyone tells you there is either fascism or advanced democracy in Turkey now; things are progressing in a unique way. This is now a country in which there is no taboo subject that you cannot discuss on television or in the press. The so-called Armenian genocide, the Kurdish question, Cyprus and so on are freely discussed in all imaginable ways in Turkey today.

“However, in the same country, if your comments somehow offend our prime minister you may be sued by him or lose your job. Well, as I have said before, we are advancing like Ottoman janissaries, two steps forward and one step back, or sometimes one step forward and two steps back.”

Ahmet Hakan, a columnist of Hurriyet Turkish newspaper, praised Hasan Cemal’s book. The Turkish columnist wrote in Hurriyet that “one of the best ‘elements’ in the book is the fact that it was written by the grandson, who managed to prevail over his own grandfather and condemned the latter’s actions, as well as developed an opinon different from the one of his grandfather.”

Cemal Pasha was killed in Tbilisi in July 1922 by Stepan Dzaghigian, Artashes Gevorgyan and Petros Ter Poghosyan as part of Operation Nemesis for his role in the Armenian Genocide. His remains were brought to Erzerum and buried there.

In Issue 5 of GPN Yair Auron and others wrote about a proposed and partly begun expulsion of Jews from Palestine in 1917 also by Cemal Pasha. Auron spells the name Jemal Pasha. See Special Issue 5, Armenian Genocide and co-Victims:Assyrians, Yezidis, Greeks, http://www.genocidepreventionnow.org/Home/GPNISSUES/SpecialIssue5Winter2011/tabid/145/ctl/DisplayArticle/mid/607/aid/295/Default.aspx

Sources:
Armenpress.am (October 30, 2012). The book about the Armenian Genocide by Hassan Cemal has become a bestseller in Turkey. http://armenpress.am/eng/news/697882/the-book-about-the-armenian-genocide-by-hassan-cemal-has-become-a-bestseller-in-turkey.html